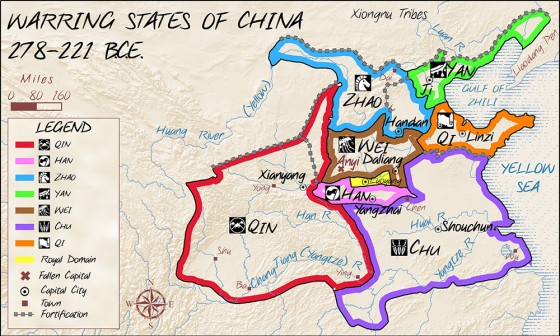 King Wen’s Tower is a new role playing game that tells the story of the Warring States period in China (453 – 221 B.C.E.) by the very talented designer Emily Care Boss of Black & Green Games.

At the end of the Warring States period in China (453 – 221 B.C.E), a bloody countdown had begun. Seven kingdoms had fought for hundreds of years, but now the balance was tipping. The Qin (pronounced “chin”) state would soon crush all others, spitting them on the cold iron of the swords and spears of their massive armies. Four to six players take the rolls of these doomed kingdoms. Facing not only the domination of their culture and slaughter of their youth, but also the elimination of the Hundred Schools of Thought flowering in these lands. And so the aspiration for the mythic heights of civilization symbolized by King Wên. These are snuffed out by the hand of King Ying Zheng, who would become Qin Shi Huang, the first Emperor of China.

My role on this project is to construct a full historical map showing the boundaries of the Seven Kingdoms just before the the various states engage in war. The following map was produced with an aim to be as historically accurate as possible. A variety of academic historical sources were consulted and led to several historical corrections including a change to the coastline and major rivers to accurately reflect the time period.

This map features a combination of modern mapping techniques such as Hillshaded relief but with a sepia tone to appear aged and worn. The map also uses a coastal style known as Coastal Rakes which were more commonly used on historical maps. The final map measures (1:15,000,000 scale) 8″ by 5″ and is designed to be placed in the final RPG book in both B/W for print and Colour for PDF, a slightly larger (1:9,000,000 Scale) Letter Size map was also produced as easily printable play aid and can be downloaded on this page. 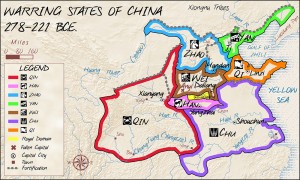 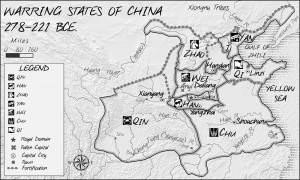