So first off, GenCon was amazing. This year was my 2nd, but my first as game designer. Beyond meeting loads of awesome people, I ran the hell out of Headspace! 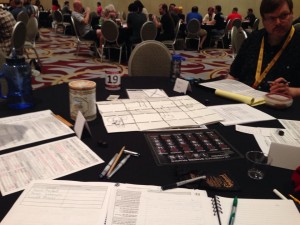 Headspace at Games On Demand!

I ran 2 x four hour games at Games on Demand, 1x four pickup game in the Embassy Lobby and a further 2 x two hour games at the IGDN room. My good friend Jason Pitre (Genesis of Legend Publishing) also ran a 2 hour game on my behalf. In all over 25 people got to play, and as best as I can tell everyone had a lot of fun. All of the games use the same rough scenario of rescuing a technician and her family from a Corporate compound (all with varying degrees of success).

I’m pleased to note that all the major components ie Moves of the game worked very smoothly and the addition of the Regrets/Drives/Flashback scenes was very well received. I’d just like to take a moment to thank everyone who came out and took a chance on something new, by someone new (I’ve linked to sites of folks I know):

If I miss-spelt your name please let me know!

I’d also like to extend a special thank you to Dustin Simeone who ran my Dreamation rules for his friends and who all came out to try at GenCon!

So besides paying careful attention to what some of the mechanics did in play, I spent a lot of time examining the flow of the “Stress Track”. The game does cinematic action against “mooks” very well, but I need to see how it works in long play, slower play and against equal caliber corporate agents. I went through a round of Roses and Thorns with every play group and I’ve been pondering over changes and ideas all week since GenCon. My preferred method of sorting out ideas is to classify them as either : Implement Now or Ask a Question.

The purpose of this is to reinterpret feedback and ideas into questions of “Should I do this?” to let me ponder and think about what the potential answers might be.

Well that was GenCon for Headspace! I’ve have some additional announcements in the coming weeks. I’m hoping to put together a few G+ Hangouts of game play and I plan on attending Metatopia 2014!